I find it incredible how some of these celebrities just keep on giving without even intending to.

The New Connection you ask? Jeffery Roth. Why are we now aware of him? He wrote a letter to judge Nathan in support of Ghislaine Maxwell's bid for a lighter sentence.

So what? Big deal, why should we care. Well, Im sure that his name Roth is probably just that, but could it have been shortened from Rothschild somewhere along the way? If anyone would have the means to be able to do that, it would be them. Why would they want to do that though? Maybe it has something to do with his job. That being, he is the archivist for the New York Times, who oversees the paper's vast clipping and photo archive. Of course Im just spitballing on this aspect. It just sort of jumped out at me to at least ponder on for a moment.

Yig if you are only pondering on this why should we care about this guy? All he is as far as his job goes is just a archivist for the New York Times. Stop and think about that though for a moment. We are talking about The New York Times here, not just a little country rag of a paper announcing the birth of farmer Johns new calf. The New York Times. Can you even begin to imagine what it housed down in that basement? Articles, Photos, who's who, original stories before they were backtracked.

Have I mentioned yet that Jeffery Roth is Ghislane Maxwells cousin? Did this one get your attention?

Let's continue shall we.

The letter Jeffery Roth wrote to Judge Nathan. It will enlarge with a click 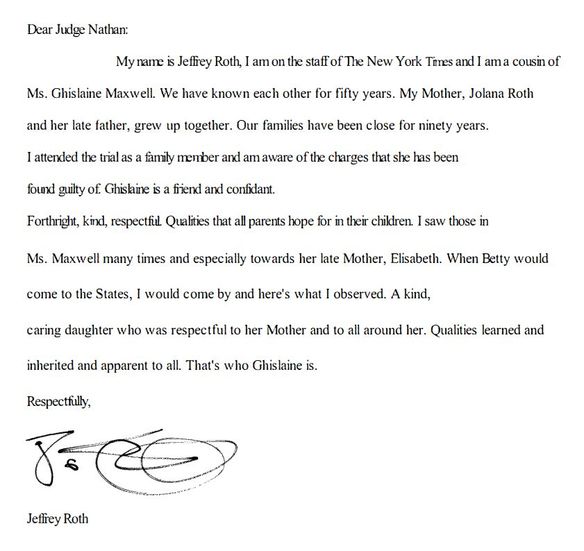 This letter is contained in this pdf document that I have uploaded for you. You can find it on page 68 and it was file on June 15th 2022. Yes, Yesterday.

So the idea that Ghislaine Maxwell, the head of the world's most notorious blackmail skunk works operation, has a supportive cousin who single handedly controls a labyrinth of private collections of photographs reaching back 150 years is rather noteworthy. The archivist, keeper of secrets.

A picture of Jeffery Roth. I wonder if she has a thing for guys name Jeffery? Naww, surely a coincidence being a Roth and all... With that said, the rich do run in strange circles and do whatever they want. Click on the link below or picture above and it will take you to more pictures of the NYT morgue if you are interested in seeing them.

Just for the history of if anything. More pics of NYT Morgue

Now it could be said that Roth exemplifies how valuable this NYT archive is: Roth located photos of a young Michael Bloomberg at Salomon Brothers, "the King of Wall Street" company he worked at only briefly. Imagine what far more inconvenient items may exist in the morgue. Also of course her sisters, the twins Christine and Isabel, between them were responsible for creating the content indexing services such as Research on Demand, Magellan, Chiliad, to name a few of their projects. Foxes guarding the chicken house of history.

If you would like even more information released yesterday from the Miami Herald, I have a bypass paywall link for you here: https://archive.ph/d1VEa 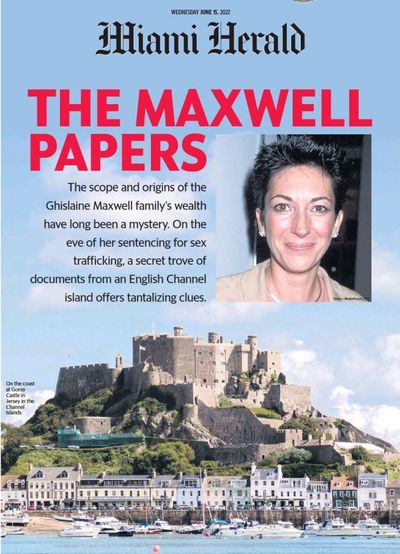 "The investigation, based on documents from the island of Jersey, a U.K. Crown tax haven located in the English Channel, shows evidence of highly irregular trading activities in publicly listed U.S. companies, secret stock deals, and possible securities violations, while millions of dollars in payments moved through offshore companies to members of the Maxwell family. These transactions, some of which may have hurt public investors, have never before been reported.

The documents are part of a much larger trove of files from a now-defunct trust called La Hougue that was based on the island of Jersey. The massive find — 350,000 pages in all — was unearthed in 2012 in a locked, indoor squash court at St. John’s Manor, a sprawling 58-acre estate, by Tanya Dick-Stock and her husband, Darrin Stock. Tanya’s father, John Dick, a Canadian lawyer who was listed in a document found in the trust’s files as La Hougue’s beneficial owner, lived in the Jersey manor where La Hougue was headquartered."

Now I will await to hear your comments or thoughts on this :)

I want to Help and Buy Yig A Coffee!

"Wow Yig. Intersting. And Continue to follow the White Rabbit"

"Hi Yig, I haven't logged on for awhile or posted here-I was drawn to your YTube channel as we have…"

"How long? How long do we need to endure this crap?. I consider myself pretty strong with a lot of…"

"I fully agree this series, these videos are well worth reviewing and sharing with friends and…"