I have a BIG INFORMATION DROP for you and I really hope you share this one out. 🤔🤨
While I am only posting snippets for the article, there is much more to read. If you just want to skip ahead, You can read the full article HERE

WestExec. A group of former 44 and 42 cabinet officials who are major players in DC since forming in 2017 and are rising to power in 2021. This is not simply a think tank. A PAC. A place for people to go and lobby. For the last few years they have been advising bid business on their futures and it has worked wit some of the following. The following is a list of some of the companies advised by founder Tony Blinken. More than 15 people are now part of the Biden Admin.

""Less than six months into the Biden administration, more than 15 consultants from the firm WestExec Advisors have fanned out across the White House, its foreign policy apparatus, and its law enforcement institutions. Five, some of whom already have jobs with the administration, have been nominated for high-ranking posts, and four others served on the Biden-Harris transition team. Even by Washington standards, it’s a remarkable march through the revolving door, especially for a firm that only launched in 2017. The pipeline has produced a dominance of WestExec alums throughout the administration, installed in senior roles as influential as director of national intelligence and secretary of state. WestExec clients, meanwhile, have controversial interests in tech and defense that intersect with the policies their former consultants are now in a position to set and execute."

Here is a small list of companies Blinken worked with.

These are the heavy hitters. This is not just a few ties to a few companies. Those of you who do not know Blinkens name should know he is the Secretary of State for the Biden Admin. Can you imagine if this was 45? It would be plastered in the media.

Many other execs worked for Obama or Clinton and with the Biden transition team and include the following. Anyone want to still wonder why 45's DOJ was dead in the water? Where the leaks were coming from?

"One of the administration’s most visible faces also worked at the firm. Jen Psaki, now the White House press secretary, was a senior adviser to WestExec, where she did crisis communications for the Israeli facial recognition software company AnyVision and advised the nonprofit Spirit of America." Then is gets better with multiple other posts.

"As companies faced the Covid-19 pandemic’s massive challenges, Lisa Monaco joined Blinken on client calls. As a WestExec adviser, she worked for Boeing and SoftBank. Now Monaco is the U.S. deputy attorney general. Before Matt Olsen earned millions of dollars as a senior official at Uber, he worked early on as a principal for the firm. Biden has nominated Olsen to be assistant attorney general in the National Security Division." 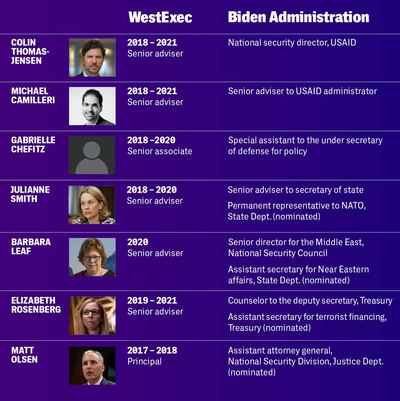 It is a who's who of those who are in charge and pushing the Progressive Agenda and continuing 44's 3rd term in office.

Pease read the full article as I said there is MUCH MORE: https://theintercept.com/2021/07/06/westexec-biden-administration/