Sure is a lot happening fast and furious...

"When nine Catalan separatist leaders walked out of jail on June 23rd after three-and-a-half years inside it was a moment of jubilation for their supporters and of dismay for many others, but perhaps also of modest hope. The previous day the government of Pedro Sánchez, the Socialist prime minister, had granted them pardons, commuting sentences of up to 13 years imposed by the Supreme Court for sedition and maladministration" https://www.economist.com/europe/2021/06/24/spain-pardons-catalan-separatists

"John McAfee, known for creating antivirus software, has been found dead in his Catalan prison cell, his death being confirmed by prison sources. The inmate’s death comes a day after the Supreme Court approved his extradition to the United States." https://www.euroweeklynews.com/2021/06/23/breaking-news-antivirus-creator-john-mcafee-found-dead-in-catalan-prison-cell/

"Jingwei is a bird in Chinese mythology," 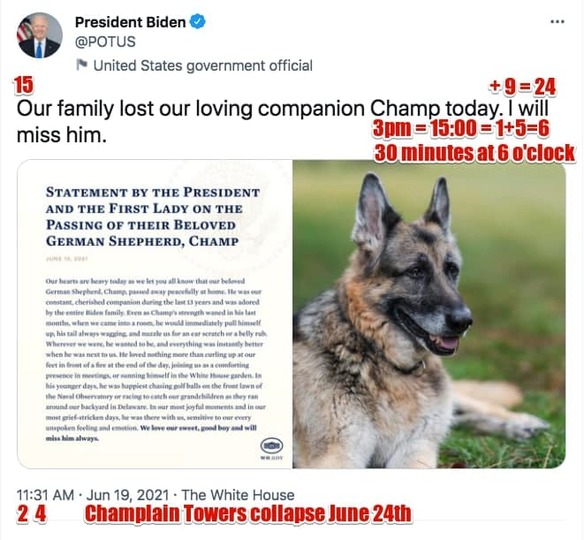 7) Speaking of the dead man switch.... from CodeMonkeyZ

"McAfee will have surely utilized a blockchain’s immutability attribute to activate his deadman’s switch.
Look carefully through BTC’s OP_RETURN transactions in the next few days and also the equivalent type of transaction on other crypto coins."

6) This video from StormRider still has a couple flashes that can be seen. Hard to say if they were charges or just power flashes from the electricity. The  flashes of lights also may have been from people with their flashlights. That would be very sad to learn. https://twitter.com/theinsiderpaper/status/1408053464547082240?s=21

5) This article below is from 2015. Looks like John McAffee has had Hillarys emails all along. I don't believe he is dead anymore than I think Epstein is dead.

4) This video has been posted on twit from https://twitter.com/_rosiesantana - Here is what she said: I am a resident of one of the condos on the side of the collapse. This is a video from my camera footage inside from the start of the collapse until the lose of connection (I was away from the building today). Towards the end, you hear the structure failing.

3) John McAfee's Instagram account was deleted after it posted the letter 'Q' following his suicide in jail. 🤨
https://www.businessinsider.com/john-mcafee-instagram-deleted-following-q-post-after-death-2021-6

2) More recent news taken this morning after the collapse. MSM starting to report it: https://youtu.be/F5NWLatGFrA

1) I really hate starting the day on a sad note.
This is a sad day in S Fla. This link has a lot of different footage of the building collapse this morning. Prayers for those that didnt make it. Looks and sounds like the death toll may climb as they dig out.
https://www.zerohedge.com/markets/i-heard-screams-massive-search-underway-after-miami-condo-building-collapse